First Look at the IronRuby

In this article we will demonstrate how to download IronRuby using Github and build IronRuby using VS 2008, VS 2010 Beta 1. We will also discuss how to interact with the .NET framework using IronRuby and how to use IronRuby from the C# language.

In this article we will demonstrate how to download IronRuby using Github and build IronRuby using VS 2008, VS 2010 Beta 1. We will also discuss how to interact with the .NET framework using IronRuby and how to use IronRuby from the C# language.

The IronRuby project has been moved to GitHub. In this article we will be using an application called msysgit to download the source code for IronRuby. Msysgit will allow us to communicate with Github and download the project on our machine. Go to the following link and download msysgit application.

After downloading msysgit simply install the application on your machine. After installing when you right click on your folder you will get a new option related to Git as shown below: 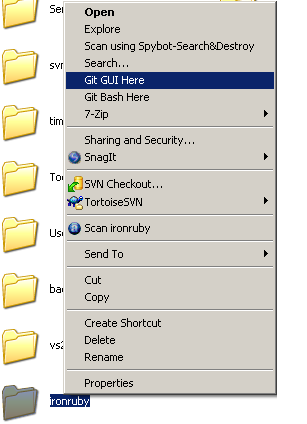 We will use the "Git Bash Here" option which will give us a command line tool to download the project from Github. Create a new folder called IronRuby and right click on it and select "Git Bash Here". You will get the following command window.

There are several ways to build the IronRuby project. You can use rake compile option or you can build the Visual Studio 2008 Ruby project. We will perform the later one. Browse to the Ruby folder to find the Ruby Visual Studio solution. Check out the screenshot below which also shows the path where the solution exists. 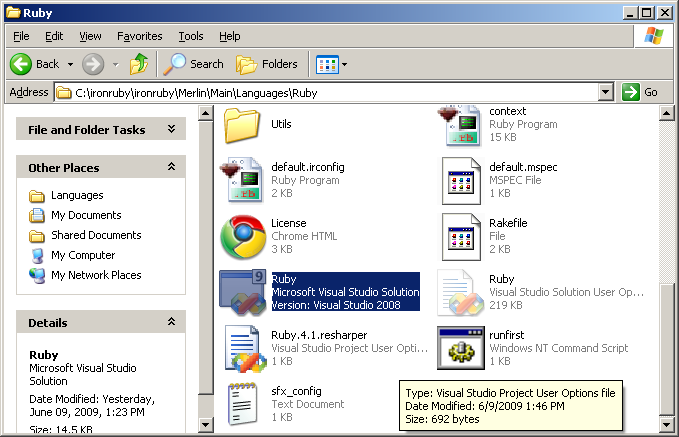 Open the solution and build the project. Now, let's see how to interact with IronRuby using the IronRuby console (IR.exe).

Now, run the ir.exe file from command prompt and you will see the following screen:

This is the IronRuby interactive console window. The good thing about IR is that every line you type is ran and the result is outputted on the screen immediately. Try it out yourself. Check out the simple example below:

The above screenshot shows some of the basic mathematical operations. Since, IronRuby is build on top of DLR you can also interact with the .NET libraries. Check out the code below which is used to open a new Window.

Why Calling IronRuby Methods from a Statically Typed Language?

The first task is to add reference to the required libraries to your project. Hopefully, you have already downloaded IronRuby project on your local machine from GitHub. If you have not then please refer to the "Downloading IronRuby" section at the start of the article.

Here is a screenshot of references required to run IronRuby on VS 2008. 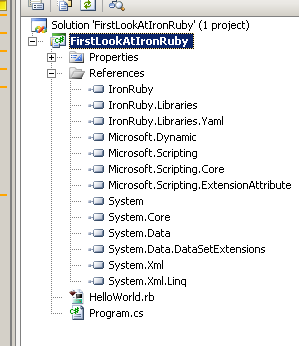 You will find all the libraries in your IronRuby folder. Remember to build the IronRuby project as described at the start of the article.

Once, you have all the references setup you are ready to execute your first IronRuby application using C# code.

There are couple of steps required to execute IronRuby code from C#. First, you need to setup the run time as shown in the code below:

Next, you need to get the IronRuby engine.

Here is the complete code:

And here is the output: 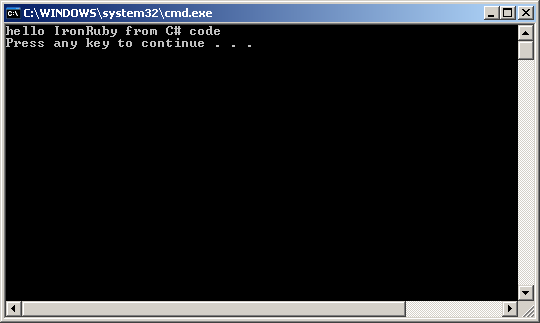 That is pretty sweet right! Executing dynamic code from static code has opened a lot of doors for us. This is a whole new world where different cast of languages can live happily and work together to achieve a better software.

You can execute any ruby code using the above method. Take a look at the MyRubyFile.rb file which contains Ruby code:

We can execute the above code using the following C# code:

Now, that you have got your feet wet with C# to IronRuby pipeline we can dive into much interesting stuff. Currently we are executing IronRuby code in an isolation. That isolation is either a string expression or a ruby file which is executed by the IronRuby engine. Let's get the RubyObject into the static world and perform some actions on it.

The Ruby code will stay the same as defined in MyRubyFile.rb file. Here is the C# code:

We use engine.Runtime.Globals.GetVariable("Person") to get the Person variable. Then we use the CreateInstance method to create the instance of that variable. Finally, we use the InvokeMember method to invoke the "foo" method on the person object. The result is shown below:

But first you need to download the latest build of IronRuby solution for the VS2010 Beta 1 which contains the support for the dynamic types. You can download the build using the following URL:

Once, you have downloaded the project you can open the solution in VS 2010 and build the solution. Your solution file is located under the following folder.

Once, the solution is build you can add the following dlls to your project:

Here is the Ruby code which will be executed as an expression.

The Person class contains a single method called "greet" which simply puts the "hello world" string on the screen. Following is the C# code which is used to execute the IronRuby code:

As, you can see we are using the power of the dynamic keyword to get a dynamic type object from the DLR world into the C# world. The person.greet() will trigger the greet method defined by the IronRuby Person object.

NOTE: Don't expect to get any intellisense support for the dynamic person class. The compiler cannot generate intellisense for dynamic type objects because of their dynamic behavior.

Let's move to something interesting. We are going to use IronRuby to scrape a webpage and return the HTML back to C# for display. Here is the Ruby code which is used to scrape the screen:

And here is the C# code:

If you run the above code an error will be thrown saying that "unable to locate the open-uri". This is because "open-uri" namespace is contained in a separate file which must be added to the search paths for the IronRuby engine. Here is the code which adds the path to the IronRuby engine instance:

Now, if you run the code it will work as expected and scrape the passed in URL. Here is the result: