Smart phones are quickly becoming a necessity in the real world. Almost everyone carries a smart phone and stay connected to the world. Apple and Google has already taken steps towards this revolution by creating IPhone and Android enabled devices. Microsoft is last to arrive but shows a great promise with Windows 7 Phone framwork. In this article we are going to create a simple Hello World application using the Windows 7 Phone development kit.

Although Microsoft is late in the game but the new Windows 7 Phone framework looks extremely promising. Microsoft has completely redesigned the user interface. You no longer require a stylus to navigate to the different sections as it has been replaced by the touch screen. Windows 7 phone consists of live tiles which updates the as the user status is updated.

Developers will also enjoy building applications for Windows 7 Phone since it supports .NET framework by default and the applications can be created using Silverlight. This means Microsoft.NET developers can use their existing skills to create Windows 7 phone applications.

The screenshot below shows the available templates for Windows 7 Phone development: 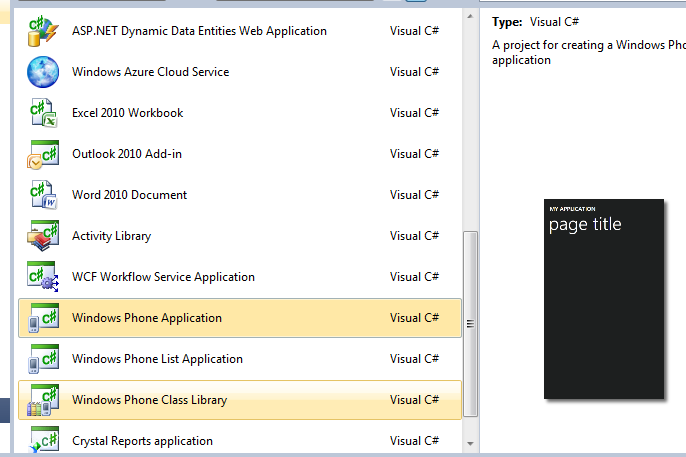 The following code is used to display "Hello World" message on the phone.

In this article we introduced Windows 7 Mobile framework which is used to create next generation Windows Mobile applications. In the next article we will create a real world application for Windows 7 phone.