Physics enabled games always gain the attention of users. The simplicity of nature mixed with the cutting edge technology and effects makes physics game more appealing and desirable. There are number of frameworks which allows the developers to implement physics enabled games. In this article we are going to demonstrate how to use SpaceManager framework along with Cocos2d framework to enable gravity in our application.

By default the app runs with a black background. Let's change that and add a nice background for the app. The background code is added in the GameDelegate file which is contained in the Base Resource folder.

The next step is to add the ball and the obstructions to the scene. Since, we will be tracking the ball collision with the final destination which in this case is an image of the star we will declare the ball sprite as a property. The GameLayer.h declares the following properties.

The above code will initialize an empty space. Now, it is time to add some objects to the space. The implementation below adds a ball, obstructions and the star to the space.

The rectangleShape is marked with STATIC_MASS which means the gravity will have no effect on this object. The ball on the other hand will experience all the gravitational forces. Run the application and you will notice that the ball immediately starts to fall down. The screenshot is shown below: 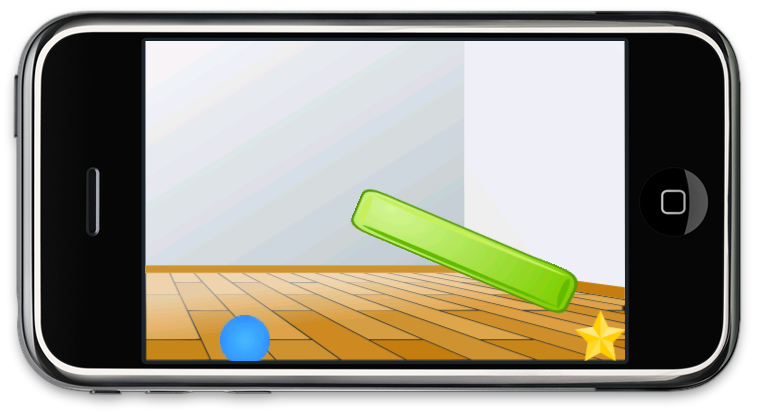 Our next step is to allow the user to drag and drop the ball anywhere on the screen. Since this game is just a demo we are going to allow the user to access the ball by touching anywhere on the screen. If you remember correctly the ball is not a STATIC_MASS object. This means when you start dragging the ball it will also start falling towards the bottom. We need someway to make the ball STATIC_MASS for the lifetime of the drag operation. The ccTouchesBegin method to the rescue! The ccTouchesBegin method is invoked when the user starts touching the device screen.

The morphShapeToStatic method of SpaceManager class changes the behavior of the non static mass object to a static mass object. Finally, when the ccTouchesEnded is triggered we need to make the ball to an non-static shape. The implementation is shown below:

Inside the ccTouchesMoved event we find the current location of the touch event. The ballSprite is then moved to the current touch position. Now, if you run the app you will notice that you can easily drag the ball across the screen.

This method is contained inside the CollisionManager class. The usage is shown below:

If the collision is detected then we simply rotate the star and puts a congratulations message on the screen. The video below shows the game in action: